Death of the Wolf.

Death of the wolf.

This poem is only meant to illustrate the post on “Surprise” where it is mentioned. The translations that are available appeared to have been made from to perspective of English writer, as if “pulled” from the French to the English translation. This meant that a few concepts were missed, therefore I tried to translate it myself, “pushing” it from the French instead. This means of course the English translation may not be as good as some would like. My apologies to the original author and to my readers for my shortcomings; this is an imperfect world in which I am truly endeavoring to do my best. 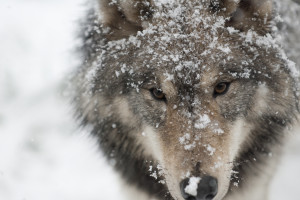 The forests were dark all around.

We were striding silently on the wet grass,

Amid thick heather and other shrubs.

When, beneath some fir,

We discovered the marks of powerful claws

Made by the roaming wolves we tracked.

Utter silence reigned over the forest and the prairie, only

The wind-vane cried out to the heavens, mourning;

For the wind, high above the ground,

Deigned only disturbing the solitary towers.

And the oaks below, sheltered by the rocks

Leaning on their elbows appeared to sleep.

There was not a noise, when, crouching

The older of the hunters

Observed the sand and lay on it,

He who had never been wrong,

That these fresh marks foretold the bearing and the powerful claws

We all then prepared our daggers, 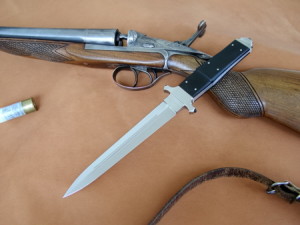 And, hiding the rifles’ gleam,

We went on, step by step, pushing away the branches.

Three stopped, and I, following their gaze,

Dancing under the moon, amid the heather.

As do every day, loudly, before our eyes,

The hounds joyful that their master is back.

But the Wolf’s cubs played mutely,

Well aware that, close by and only half way asleep, 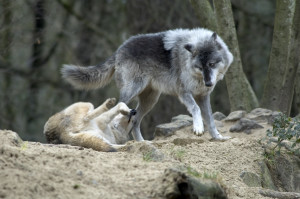 Lying within his walls was their foe; man.

The male wolf was up, farther, against a tree

The Romans worshiped, and whose flanks

Nursed the heroes Remus and Romulus.

The Wolf came forward and crouched, his legs tensed,

Burying in the sand his powerful claws.

He knew he was dead because he was surprised,

His retreat, all his paths cut off.

At once, he took in his burning maw,

The throat of the bravest dog. 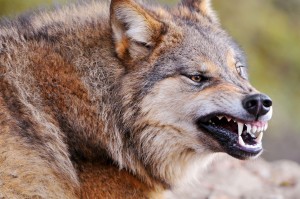 He never loosened his iron jaws,

Despite our bullets cutting through his flesh,

Plunging crisscrossed through his entrails.

Until the end, when the strangled dog,

Dead long before him, fell at his feet.

The Wolf then forsook it and looked at us.

Our daggers thrust to the hilt still in his flank,

Nailing him to the grass, drenched in his blood;

Our rifles surrounded him in a sinister crescent.

He kept looking at us, lying down,

Licking the blood around his mouth,

And, not caring to know how he died,

Closing his great eyes, expires without a cry.

I rested my head upon my empty gun,

Lost in thoughts, I could not find the will

To track his female and her two cubs, who all

Would have rather waited for him.

Would never have left him face the ordeal alone.

But her duty was to save her cubs,

Teach them to stoically suffer hunger,

To never accept the pact of the towns

Where man tames animals that hunt for him,

The first owner of the forest and the mountain 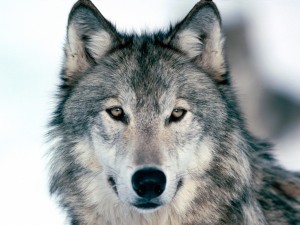 In exchange of shelter.

Alas, I thought, in spite of the great name of Man

How ashamed I am, defective as we are!

How to leave life and all its ill

You are the ones who know, sublime beasts!

Observing what we were on earth and what we leave behind

Only silence is dignified; anything else is weakness.

Ah! I heard you, feral traveler.

Your ultimate stare struck me in the heart!

Stating: “If you can, see that your soul,

Until that ultimate point of stoic pride

I attained in spite of being born in the woods.

Wailing, crying, begging is for the cowards,

Carry on with energy the long and arduous task,

That fate saw fit for you,

Then, as I did, suffer and die without a word.”