A line, a gun and a prayer.

Posted on 9 February, 2016 by Patrick Estebe in General Security 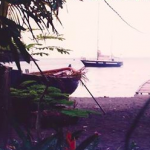 The Micromegas was a 45’ steel ketch. After many adventures together including crossing the Atlantic, the symbiotic bond between the boat and the sailor was complete. The fact that I had built it only added depth to that connection. I knew everything that was happening onboard the moment it was happening; every noise, every squeak, even the sound of the waves on the hull were the way my ketch was talking to me. In this symbiotic relationship I had always been the less trustworthy element; this was about to be confirmed in a dramatic way.

In order to pick up a charter in St Marten I had left the anchorage in the South of Martinique early, in spite of having missed sleep many nights in a row, due to the many charms of the Caribbean.

The day was uneventful; it looked like it would be fair weather all the way to St Marten. By the late afternoon I was offshore St Pierre in the North of Martinique, by now it was clear that I would need to sleep at some point so I opted for a route way downwind of Dominica, the next island on the way north, and set my trusted Aries wind vane on that very safe bearing. This would also avoid being windless as the mountains of Dominica shelter its west coast. The wind vane and the sails were set on this safe bearing. The trusted ketch was doing what it did best; cruising effortlessly at about 7 knots. Too few people experience the contentment coming from the simplicity of this mode of transportation.  I stood watch until about 2300 and with nothing out of place onboard and nothing on the horizon I went for a short nap in my cabin. I would wake up in about an hour as I usually did, all would be OK.

The first impact felt like a freight train had hit the boat. It was so strong I hit the bulkhead; I leapt on my feet to get up the companionway thinking I had hit a container. The second impact, more violent and more dreadful threw me horizontally through the living room all the way to the next bullhead. At the same time with the boat careening, two dive tanks stored next to the chart table were now horizontal, with the inertia and nothing to stop them at this angle they torpedoed straight at me; they missed me by inches, one on each side. With the horrendous noise of metal twisted by the impacts on rocks the boat at last stopped. I went up the companionway ladder, now in a low diagonal and measured the horror of the situation; we were high and dry. 13 tons of steel at 7 knots means a lot of momentum. I screamed like a harpooned whale. I had betrayed my boat and it was hurting. It hurt so much, I could not think straight.

I took Samba my panicked dog with me and jumped on the beach to stop the onslaught of bad news and escape the loud complaints of my wounded ketch. Once on the beach, I even turned my back as I needed absolutely to recover my center. I closed my eyes, breathed deep and went deep inside myself to find wit and strength. Breathe, find the center, breathe again, and keep the center. Five minutes later I was back with revenge.

Looking back at the boat lying on its port side, the sails hanging miserably, my heart was full of hatred for my mindlessness. With no one else to blame and no one around to help, I went back on board determined to save that boat even if I had to carry it on my back.

Long ago, before I left France, an experienced seaman advised me to embark a spare 200m spool in addition to the 100m spare spool that was already onboard not counting all the spare running rigging spools also stored. Unable to visualize why one would need a 200m spare anchor line I decided to follow the advice nonetheless. He also emphatically dismissed the winches recommended by the naval architect and urged me to take two sizes up; again I followed his advice. On the water experience matters! Now I was so happy I did!

After restoring order on the deck, I went to extract the 200m spool from its deep storage, took a 20 kg FOB anchor, three fenders so their buoyancy would compensate the weight of the anchor and line, put on my extra long flippers and a mask and swam offshore to drop that anchor. So concerned to drop the anchor far enough, as it was a one shot deal and well aware that by night distances can be underestimated, I ended up dropping it way too far. Now I was unable get back to the boat in spite of the length of the line and when I stopped swimming toward the boat the current brought me westward, parallel to the beach; next stop Nicaragua! Luckily I was anchored! The situation was so absurd; I took a moment to look at the beautiful sky with a great moonlight. Living the fenders at the end of the line now about 300m away from the boat against the current, I swam back onboard.  There I recovered another spool (100m only this time) hoping with all my heart that this would be enough and swam back to the fenders and the main line. Tying them together with a fisherman knot thinking it would go easier through the winch, and now swimming against the current that pressed against the 200m+ of immersed line I reached the cockpit exhausted but still determined as hell. Right away I started winching the line and started to put serious tension on the line; the boat was not moving. Pulling on the winch handle like my life depended on it, increasing the tension to the maximum I could, created encouraging friction noises. It looked like I would have to fight for every millimeter.

This is when things went really bad. It must have been about 04:00 and the early birds had realized a boat had crashed on their turf; everything that was stored on deck and had washed on the beach, still there a moment ago, windsurf board, jerry cans, fenders, had disappeared. That was OK with me as I had bigger problems. I repelled the first group by telling them that I did not need any help, even though they never offered any, and that the French Navy was on its way, as I had been assured by the only VHF transmission I had managed with a passing ship. Now a second group, four muscular guys approached the bow and were taking a strong grip on the bow pulpit to climb onboard, I went to them to repeat what I told the others, but this time they did not even look at me and proceeded to climb onboard. Having been in many a confrontation before that I recognized instantly that it was an assault, each of them had 20 pounds on me; I did not stand a chance empty handed. Luckily I could progress on my much inclined and much cluttered deck faster than  anyone else in the world, once back in the cockpit I retrieved my .357 ( Stainless S&W 65-4”) from its handy storage. By now the first of them was a mere six meters away; I aimed

straight at his face and, making sure I would “miss” him by pulling the trigger finger up I fired. The deflagration of the full charge .357 Norma shattered the stillness of the night, and the muzzle flash meant business. The first guy literally stopped on his heels, I fired a second time that sent everyone in the opposite direction and when I fired the third time the deck was cleared.  Superior fire power had given me room to keep maneuvering on my boat and the wisdom to avoid loss of life prevented the crisis to spin out of control all the way to hell. To make sure there would be no further misunderstandings I picked up some ammo and proceeded to reload in plain view of all my new friends. In truth I had no bad feelings for them; I knew their dire poverty and I was the idiot who crashed his boat on their door step. That did not mean I would let them plunder my boat. By now there were about 30 of them in a half circle, at a safe 50m radius from the boat.

After this episode I resumed winching the line to tow the boat off that rocky beach. The winches were not self tailing and I put myself to this task with the strength we find in survival mode as the fate of the boat depended on that effort. The recent confrontation helped firing up adrenaline production.

Time passed. I could feel the boat was moving if ever so slowly, I did not look to remain focused, not able to divert an ounce of energy to anything else than winching this line. While I knew I the boat moved in the right direction, the situation was dire, I was still on the 100m spool and beyond the fact that it was disconcerting I was very much alarmed by the fact that the line was about half its normal diameter under the strain. My knuckles were white and I could not open my hands anymore; all I could do was holding the line and the winch handle and forcing all my body to keep pulling. I could feel my strength weakening as I had been hyperactive on adrenaline for several hours now. Survival mode is not meant for long term use. Fear was showing its ugly head in my mind when I noticed the plunderers had reinforcements on boats and there was now a half-circle of small embarkations, on a 100m radius from the boat; I was totally surrounded on land and on the water, and very concerned that one would find the line under water and cut it.

“Do you believe in God?” said a voice.

My heart sank; I thought I was having hallucinations. Remembering St Exupery’s Little Prince that I had read many times I thought: that’s what it feels to become mad. 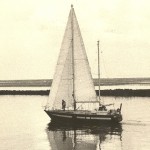 Before I could answer, I realized he was already the bearer of great news; to reach the cockpit he had water well over his knees and this could only mean that the tide was coming back up! Fantastic news! Back to my new found friend the conversation went like this:

– I certainly do but why does it matter?

– Because, brother, if you pray with me; you will be saved!

– Well, God helps those who help themselves. Why don’t we team up? I keep pulling on the line, you keep praying and the two of us will save the boat.

– Yeah man! We team up, keep pulling I shall pray for you, God is with us man!

And he went back on the beach and I kept pulling, and pulling. Now the progress of the boat was significant at every pull. Every wave helped its progress toward the sea. Soon I was on the 200m spool and with some more winching the boat was at last vertical. On the beach my new friend was jumping up and down screaming: “Alleluia! Alleluia! God is with you!”

Pulling the rest of the line was easy. I crossed the half-circle of small boats exchanging unfriendly stares, and set sail on my wounded ketch back to Martinique.

And this is how a line, a gun and a prayer saved the day. I would never leave port without them.

Extra equipment and guns seem so superfluous when all goes as planned, but when things go sideways they become crucial.