Were we born prey or predators?

Posted on 24 June, 2013 by Patrick Estebe in General Security

With all the fear mongering going on both on TV and on the internet, one could be justified feeling like a prey. In fact fear is precisely the basis of most social structures as scared people are so much easier to herd. 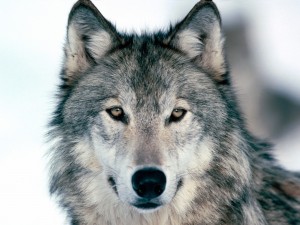 Modern society acts promptly on our young minds; we all remember the “Three Little Pigs” story and its lesson; one should have a solid brick house for when the wolf comes.

Now those of us who do not have the opportunity enjoy the outdoors for whatever reason, have a chance to watch television (probably only too much!), hopefully including documentaries on wild animals.  Therefore most of us have had a chance to notice the way to instantly classify an unknown animal, at least among the mammals, as either a prey or a predator.

The animals born to be prey have eyes on the sides of the head to have as much as possible of a 360ᵒ view of their surroundings as they need an early warning if anything comes through the perimeter. The predators instead have eyes on the front of their heads so that they can estimate distances precisely in order to attack their prey.

Where does this put our species, if not squarely among the predators?

Reversing all the conditioning and forgetting fear is the most essential step toward security.  Certainly the pictures of the bad guys can be scary, but then again; last time we looked at a mirror, were not our eyes on the front of our face?  We were not born to be on the lookout for danger; we were born to be the attacker.  The fact that some of us are well aware of it should not stop the others to remember their true nature. 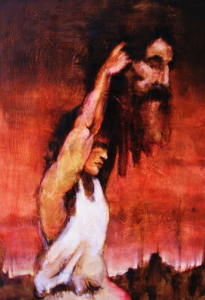 The Goliaths of the world certainly look scary; but the Davids can be very deadly themselves.  Obviously most governments would rather govern millions of nice working little pigs, terrified in their brick houses rather than millions of lions unafraid and roaming freely.  Herding cats is already more difficult than herding pigs or sheep; imagine herding lions!

This is why we are all conditioned to be cowards in need of protection early on.  We have been poisoned with fear from the day we start talking; the modern social structures rely on fear.  Luckily it was not always the case for without the Spartan’s courage at Thermopylae democracy would have been short lived.

To free our minds of deep and constant conditioning requires steadfast spirit.  This is both more arduous and simpler than can be imagined.  It requires commitment, and importantly some not fun activities such as reading and fitness (Indeed it is important to grow a brain at least as fast as we grow brawn) and either or both praying and meditating.

An early step toward security and reacquiring the birth right status of a predator is paradoxically to accept insecurity.  One should feel comfortable without this false sense of security provided by society, and rely solely on the deep knowledge of one’s true nature. We may not have claws, but nothing should stop you from learning how to swing a knife. We may not be able to spit venom, but we surely can spit lead at 1200 feet per second. The availability of firearms makes it easier to be a predator and that has probably lead to a huge drop on the fitness side, a major, possibly lethal issue, but for those who keep in shape the addition of firearms certainly makes them mighty predators.

Therefore when the wolf comes; instead of hiding inside our little brick houses, let’s make sure the door is not locked so that we can devour the beast before it even understands that we are not prey but, truly, lions.