The World As We Know It

Posted on 8 July, 2013 by Patrick Estebe in General Security

With the constant uncertainty and increasing entropy in the world many can be forgiven to prepare for “The End Of The World As We Know It” or TEOTWAKI, we all can feel that a major crisis is coming.

However, it could be much wiser to prepare for the world as we know it (TWAWKI), with levels of brutality and chaos most people simply try to over look.  Looking at history and current events would provide better insight than buying into the fear mongering of modern media.

The distinction is important because when preparing for the end of the world as we know it, too many start going way off the path of common sense and prepare in their very own ways with their assumed knowledge of the best solutions.  When preparing for the world as we know it one would rather stick to common sense, try to learn from history and act accordingly.

One typical item many are packing for TEOTWAKI is a pistol grip 12 gauge; every time I see one packing this kind of thing I feel obligated to ask how many rounds they actually fired with this gun since they installed the pistol grip.  Given the opportunity I would invite them to the gun range, ask them to shoot an entire magazine of their choice of shell, even kindly suggesting that perhaps they should avoid the slugs.  The results are most of the time the same, with the exception of the most robust guys; the difficulty of controlling this gun and the pain sustained in doing so make them quickly remember that the gun was sold initially with a full stock and that after all it could just make more sense for them to keep it that way.  That is the moment that I point to them that they may need either their wife or their daughter to handle the gun because they could  just be out of commission for one reason or another, and that if it has a pistol grip they may use it once sprain their wrist and thus also be out of commission thus only aggravating the situation.  Instead with a full stock one could show the girls how to put the gun under the arm, the stock resting on the wall and thus shoot effectively at short distance without having to fear the recoil. The 12 gauge pistol grip looks really cool in movies, significantly less so in the world as we know it.

Going through the old towns of Europe, one can often notice important security details evolved through centuries of real insecurity and designed with down to earth common sense.

For instance going into a town house, once passed the (very) heavy door, there is often an odd long L shaped, high ceiling corridor with another (very) strong door at the end of the small part of the L. This way the visitors could be checked twice, first in the street then in the kill zone that the L shaped corridor in fact was. Indeed there was a barred window at the end of the corridor, at the upstairs level to have a definitive advantage, where a few muskets would do great damage to unwelcome visitors who were like fish in a barrel, and to make sure there were also a few windows on the side also at the upstairs level where pistols could be used as well.   And of course the neighbors were usually kindred spirits so that the entire street could be held for a significant time.  The bloody religious wars had taught these town folks a thing or two about security.  Those who did prepare for the world as they knew it survived.

Of course modern ballistics sent the race between the spear and the shield into a maddening pace and mobility has become the key parameter.  Still one should remain exceedingly realistic when preparing for rough days.

Another interesting dichotomy in this TEOTWAWKI versus TWAKI issue is the huge drop in equipment reliability.  Several times people pointed to a single piece of equipment (it truly does not matter what kind of equipment) claiming that this was their life insurance.  Forgetting that this was as likely to fail as any other piece of equipment and much more so under the strain of exceptional circumstances, they actually had a very fallible life insurance.   Redundancy, looks like a waste of time and money in normal times, yet when a crisis occurs redundancy often saves the day.  The rule of thumb to remember is:” To have TWO is to have ONE, to have ONE is to have NONE.” 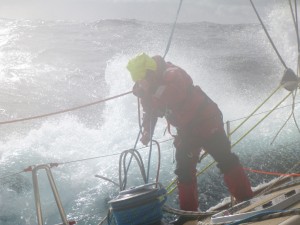 Try applying it to any plan you make; do not put all of your family into one car or you will be in trouble sooner than you wish.  Having a spare car means having a real alternate car, just like having spare tires means a minimum of two real size spare wheels, not a tiny doughnut hidden under all your stuff.  If you have a small family and therefore very few options for the alternate car then plan ahead with a friend or neighbor so that you can put all passengers into one car and have the other.  If you are an empty nester instead of having a “his and hers” cars from different car makers, it would make a lot of sense to have the same model in different colors (although same color also has numerous advantages for security) so that you now have plenty of spares tires and other spares. Try putting a Ford Expedition wheel on an Escalade… Instead of feeding the ongoing argument of Wrangler versus FJ Cruiser; just look at what your close friends have a make the same choice, now you have compatible alternate cars for when the world as we know it comes knocking at your door.

The world as we know it may end because of a meteorite or because the sun sneezes or because aliens blow us out of the universe; there is nothing we can do about it and therefore let’s not waste time on this.  But we know that the world can become swiftly a very dangerous place and while we should relax and enjoy peace we should also quietly and thoughtfully prepare for inevitable difficult days.  Take a clue from the sailors; they are always happy and relaxed enjoying every cruising day, can never be bothered with the end of the world as we know it, yet they are dead serious in preparing for extreme crisis the world as they know it has in store for them.