Limitations of the AK

Posted on 29 July, 2013 by Patrick Estebe in General Security

With many concerned people purchasing guns there has been huge quantities of Kalashnikovs sold.  Yet, the frenzy toward the Kalashnikov may not be as pertinent as many people think it is.  It could be useful for the buyers to keep in mind the design concept of the ubiquitous gun.

No one will ever question the AK reliability; there is overwhelming evidence of it.  This thing will work in about any circumstance no matter how bad the environment or the maintenance skills of the operator.  Anyone who has to face a group armed with this effective weapon should be seriously concerned. 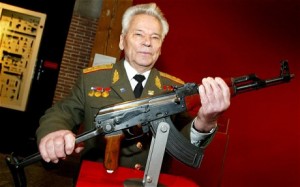 This being said it could be of interest to put it back in context to discover its limitations.  This gun was developed as an infantry weapon; what is often overlooked is the Russian infantry concept when it was designed (1947) was to put a lot of man power on the line and equip this man power with as much firepower as possible.  Quantity for both man power and firepower was the deciding factor, quality was secondary.  The AK consistently proved itself in this role; it will reliably spray lead down range and with many people shooting at the same time and in the same direction; it simply creates hell down range.  This is why it is used so much by armies, rebels groups, gangs and other large bands.

Now it just happens that the very concept of security is to prepare against such an onslaught; it is about the happy few band of brothers facing the many foes.  And while it may make sense for the attacking gang to come with AKs, it makes much less sense to oppose 15 or more AKs with a handful of similar weapons.  One has only to look at the AK’s mark in Reynosa (Mexico) to have an idea of what a trigger happy gang can do with full auto Kalashnikovs.

The great weakness of the AK is that it just cannot shoot precisely at 100 yards and beyond; this is inherent to its barrel and gas operation design.  At 200 yards it is impossible to get any group; this is inherent to the weapon concept and construction.  To this great flaw it is important to add the important detail that most civilians will in fact buy a self reloading rifle that only looks like an assault rifle.  The fact that beyond utterly lacking precision it will only operate in semi automatic mode reduces to nothing the AK advantage compared to other weapons. 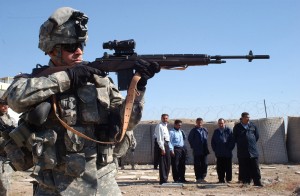 Indeed if one ends up on the wrong side of a large group of AKs, which will likely be full auto as outlaws will not bother with legal weapons, I would rather have effective AND efficient firepower to oppose them.  One is better off with a serious self reloading rifle such as the Springfield Armory Scout or any similar rifle.  The fact that the army still uses the M14 should give a hint about its usefulness.  I would favor the 7.62 just to make sure that every time the trigger is pulled there is a result on the other side of the perimeter.  This is the deciding factor; the AK wielding crowd does not care what any single bullet does, the opposing security team instead must ensure every bullet reaches its mark.  The semi auto AK just cannot do that beyond 50 yards.  It does not matter how fantastic the purchase deal was; when you actually need this thing to shoot precisely beyond 50 yards you may be greatly disappointed.  If the 7.62mm is not an option wise people will pick 5.56mm  quality self loading rifles such as the AR15 or the FN 2000.  The larger caliber of course offers more options, especially if beyond self defense hunting becomes a necessity.

When a small team is considering being attacked by a large number of AKs in full auto mode, it is obvious that a smaller number of AKs limited to semi auto mode will not change the balance.  That same team would have a better fighting chance with a half dozen scoped Scout rifles capable of hitting their mark almost every time.  The Kalashnikov may be both cheap and good, but when your life is at stakes you will want a gun that is truly superior to that of your foes. 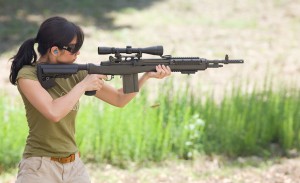