Look where you want to go.

Posted on 27 May, 2014 by Patrick Estebe in General Security

It is a well known rule of riding, or driving, as those who make the mistake to look at the obstacle or wherever they do not want to go just end up there. The process is interesting to watch, to the untrained eye it could look like the rider or the driver suddenly decided to go off the road or into the obstacle. This is plainly evident in all the motorcycles videos now available, where it is easier to see where the rider is looking. But the same principle applies when driving especially if/when one starts drifting. 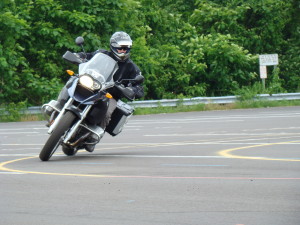 It took me a long time to fully assimilate this most important lesson, in spite of it being taught to me the hard way, repeatedly. It started when I rode mopeds on iced roads, if the front wheel started to skid I would look at the ground and, instantly the ground would rush to my face before I could do anything. It did hurt, if anyone is wondering. Yet in spite of the pain or perhaps because of it, the obvious still escaped me for a couple of snow seasons. I had to wait until I upgraded and rode trial motorcycles, skidding and drifting every which way in mud, to get a clue. The fact that some friends would keep screaming “look where you want to go!” possibly helped getting it too.  Being very young and excited riding funny machines in the mud did not help focus on the underlying principles at work.

Having made this principle a permanent fixture of my mind settings probably saved my life a couple times riding so many miles through so many different latitudes and longitudes. Look where you want to go works just as well in Africa as it does in EU or the US, or even in NZ.

It also applies very much in military tactics. The charge of the Light Brigade “into the valley of death”, in 1854 in Crimea is a clear example of what happens when this principle is not applied. Just as the many doomed infantry charges made in WWI against the German machine guns. Compare this with the battle of Austerlitz where Napoleon defeated in one battle all the major armies of EU to see what happens when the principle is applied.

It is paramount to look where you want to go in security. In a confrontation if one looks at the strength of its opponent, it will not be long before he gets introduced to that strength in a hurtful manner, if on the other hand one looks at the weaknesses one may have a fighting chance. Similarly if one faces a group, looking at the wall of muscle could be disheartening, just like a climber who would be looking at the void below him. But, looking at the gaps between the individuals, or finding a soft target on the strongest one, may provide a chance to improve the odds.

My Grandfather kept telling me a story about our elders that illustrate the attitude one acquires when relying on this principle. With two of them left, exhausted, fighting back to back, surrounded by their foes during the Albigensian crusade, (long ago when central government was as corrupt as was organized religion), their dialogue is reported to go as follows: 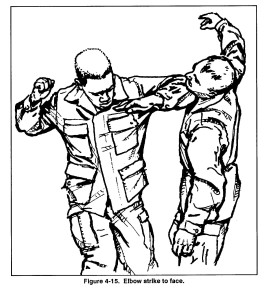 -“No! I am just thinking of all the work we will have digging all these graves!!”

He was just looking where he wanted to go, not where the cowards were trying to get him. Sure bragging is a tradition in these parts; but the idea remains valid.

It is remarkable to witness how the fact that one would look at an obstacle makes this obstacle jump to one’s face, or how to look at the outside of the curve make one drift off the road. It is as if the mind would make one end up instantly  just where one looks. Your dentist will be very happy if you keep looking at your opponent’s fists, but true friends will insist you should be looking at the targets you want to hit on your opponent(s). 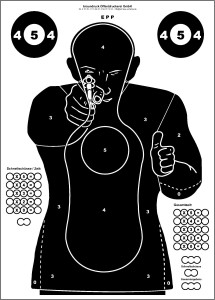 If one looks at how menacing or strong or well armed his opponent truly is, one will inevitably freeze and may lose any fighting chance. On the other hand if one looks at what technique is available, what paths for movements are available and what targets the opponent offers then one not only has a fighting chance, he has made the first step in the right direction.

Security is often both about confrontations and driving, looking where you want to go is simply an essential principle to keep in mind at all times.

With more experience in life, this principle only becomes more important as it seems to apply to much more than riding, driving and fighting, and pervades every field of activity, from working out to health issues, to philosophical considerations.

Put simply: look where you want to go.